The “Risorgimento” of Rome’s Art and Craft: creativity is everything 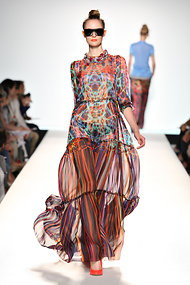 An apricot sunset over the waters of the river Tiber, a catwalk show on the new Ponte della Musica bridge, dresses slithering over the body like light and shadow — you could not get a more classic vision of alta moda, as Italy’s high fashion is known.

This 21st-century flashback to the era of la dolce vita even had the actress Gina Lollobrigida sitting front row at the Faustus Sarli show. La Lola, as she was known in her cinematic heyday, wore the brand’s red and green flowered dress with a matching ruby and emerald necklace, sparkling under her spirited curls.

Eternal fashion in the eternal city sounds like a romantic mix. And the Sarli couture dresses, with their geometric lines raking shapely bodies, their structured architecture and glass fringes dangling at a cutaway back suggested an update of alta moda.

But Silvia Venturini Fendi, the president of the AltaRoma/AltaModa organization, wants more: a “creative meeting point.” She aims to align fashion not just with the society women who still want couture clothes, but also with the crafts that are the heart and fashion soul of Italy.

“Rome has always been a center of craftsmanship,” says Ms. Fendi. “There are streets named for basket makers who are still making them today. ” Ms. Fendi’s own hand-decorated baguette bags are celebrating a 15th anniversary this summer. The resurgence of Rome comes from the idea that Milan, long the capital of Italian fashion, has an aging roster of mighty designers; and that the city’s industrialized fashion, while still a hub for international brands, lacks the emotional engagement of products crafted by human hands.

Rome was Italy’s first fashion center before the shows migrated to Florence and its Pitti Palace and then to Milan.

“Alta moda started here right after the war, then in the late 1980s it lost its power, and even Fendi, which had presented during high fashion in Rome, went to Florence and the Palazzo Pitti,” Ms. Fendi explained.

Rome’s current initiative is based both on exploiting the existing creative crafts and on finding new talent.

Franca Sozzani, editor in chief of Vogue Italia, heads up the fashion event named Who Is On Next, a contest to bring designers who already have small businesses into the limelight.

“Creativity is everything,” said Ms. Sozzani, as she brought the finalists together this month in Rome, offering a runway platform to fashion designers and a chance to make inventive videos to those doing accessories.

The result was a clear win for the sophisticated prints and imaginative cuts of Marcobologna, a label by fashion duo Marco Giugliano, 26, and Nicolò Bologna, 27. The accessories awards went jointly to two shoe designers: Conspiracy, designed by Gianluca Tamburini with his fantastical footwear decoration, bringing twists of coral to stiletto heels and flower garlands to the straps. and Carlotta De Luca, a Roman trained at Central Saint Martin’s college of fashion and design in London. Her architectural shaped heels and multistrap shoes are sold internationally under the name Charline De Luca and by 11 Italian stores including Luisa Via Roma.

Ms. Fendi’s approach is to nurture craftsmanship by providing a place — usually an old stone building — where originality and creativity are paramount.

Her point of view includes the public, who were also invited to attend the events and follow a trail of contemporary art galleries in the Trastevere district with its medieval streets, art and architecture academies and its prison.

The first event, named “Limited/Unlimited,” took as its theme “Sculptural,” inviting designers to express in one single piece the relation of fashion to the human body. It was on view for four days to the public at the complex of Santo Spirito in Sassia.

Ms. Fendi called it “the new soul of alta roma” and sees it as a project to give free expression to creativity. Well-known names involved included Fendi itself, Valentino, Roberto Capucci, Marco de Vincenzo and Maurizio Galante, whose marbled chair seemed like an artwork.

A spiky jacket created from pine needles by Tiziano Guardini competed for attention with claw shoes from Aoi Kotsuhiroi and the equally arresting wood block heels designed by Cat Potter.

Valentino produced a dramatic cape in ivory tulle caged by whale bones and decorated with bows.

“This is about a young generation. When we started there were many young people,” said Pier Paulo Piccioli, speaking alongside Maria Grazia Chiuri, his co-designer at Valentino.

“Rome is not about a fashion lifestyle,” he said. “You really have to work hard, more than in Milan or London. And fashion today has to be open-minded.”

The second Roman project was the Artisanal Intelligence, or “A.I.” Fair, conceived by AltaRoma to unite art, craft and fashion under the umbrella “Made in Italy.” A walk past hanging laundry, as if in a typical old Italian apartment block, led toward historic wooden doors undergoing restoration and then to a gallery with 25 artisans. They included Roman shoemaker Petrocchi, still creating handmade footwear on wooden lasts, to designers of Tuscany hats, embroidered bags and clothes with an independent spirit.

“The whole concept is to help independence,” says Ms. Fendi about the AltaRoma projects. “Milan does industrial fashion. We want things that last longer. First of all, every piece is different and can also be customized. It is not something that has a date on it. It has a different fashion life.”